We’re happy to announce the Company of the Phoenix, a program that allows you to create content (Adventures, Places, Threats, and more!) for Fading Suns using the intellectual property of Ulisses Spiele. Create your own Fading Suns titles according to the content guidelines of the program, upload your titles to DriveThruRPG and share them with other Fading Suns Fans. You can delight the community and even earn money doing so.

In addition, all of Fading Suns’ previously published products are now available both in the F-Shop and digitally as PDFs in the E-Book-Store.

Further we are already with the second wave in a crowdfunding. You can check this out at our official Game On Tabletop-Crowdfunding-Page. 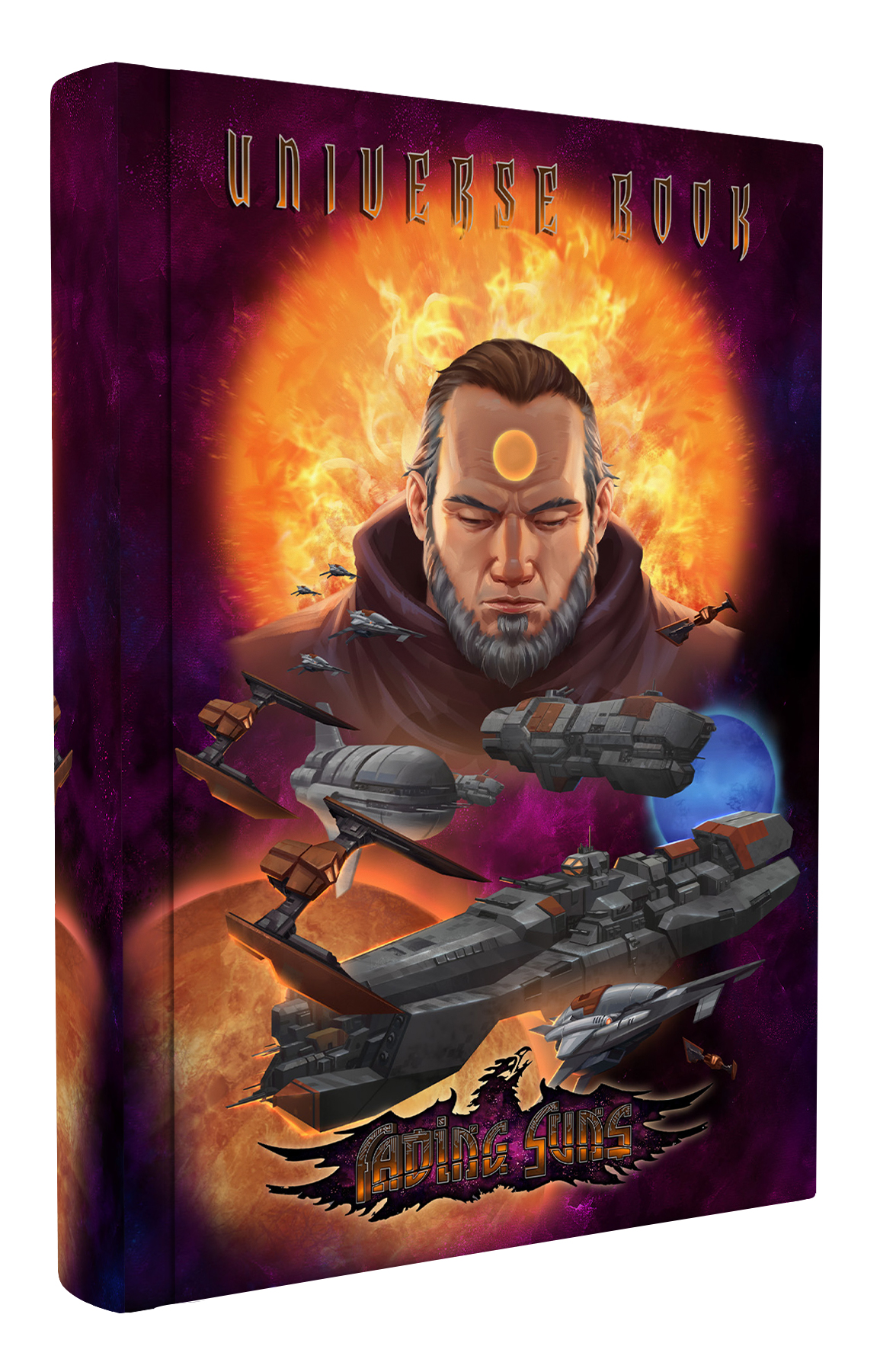 A Far-Future Passion Play. It is the sixth millennium. Humanity spread across the stars and built a republic of advanced technology and universal emancipation – and then squandered it, fought over it, and lost it. As the light of the stars began to slowly fade, a New Dark Age descended upon the Known Worlds. Then, from the ashes of war and ruin, Emperor Alexius rose to power and ushered in a new era of hope. He calls now for brave knights, wise priests, and resourceful guilders to bring his peace to all the worlds, known and unknown.

The Universe Book presents the setting for Fading Suns: its history, society, and astro-geography. Herein you will encounter nobles, priests, guilders, aliens, psychics, cyborgs, and more.

Buy the Universe Book as PDF 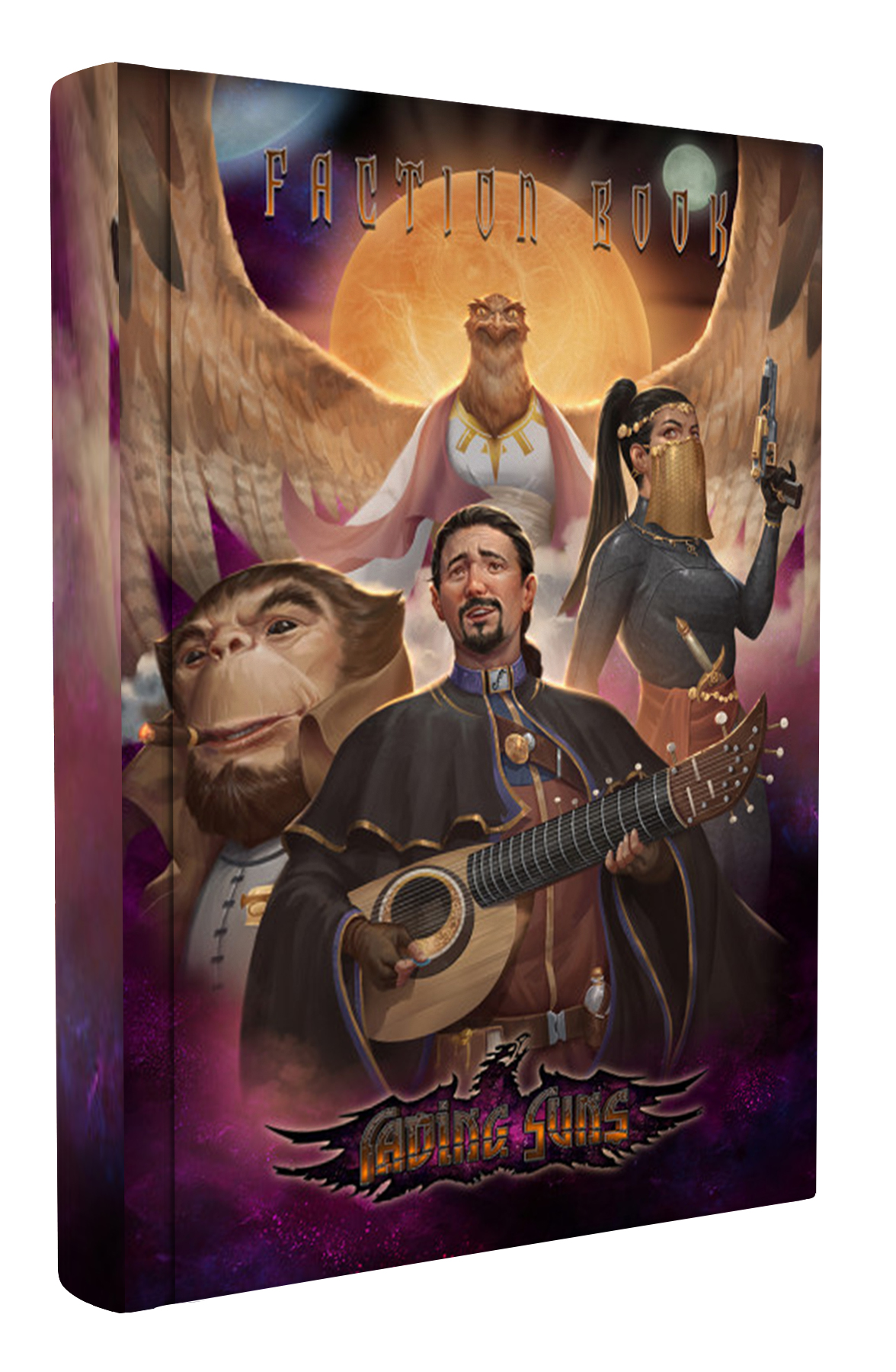 Yearning to Rise. The Royal Houses, the Church, and the Merchant League conspire to control all avenues of power. Despite centuries of rule, they just can’t manage it all. A number of minor noble houses still exist, clinging to dwindling fiefs and fading titles, resisting other houses’ attempts to subsume them. Smaller orders and sects strive to gain converts among the forlorn, forgotten, and heretical. Minor guilds eke out livings beneath the shadows of the League giants, selling wares and services the big guilds ignore. And some among these minor factions are aliens: the simian gannok, the ungulate shantor, the avian etyri, amphibian oro’ym, insectoid ascorbites, and the reptilian hironem. In the Pax Alexius, any one of them might yet rise above their rivals and claim a voice in the fate of empire.

The Faction Book presents the minor houses (from Eldrid to Xanthippe), minor sects (from Chorali to Preceptors), and minor guilds (Apothecaries to Wranglers) of the Fading Suns universe. Herein also are the pagans (Zuranists and Gjartins), the sentient alien species of the Known Worlds (from ascorbites to shantor), and the Changed, the genetically altered mutants scorned by the superstitious populace for their wondrous endowments.

Buy the Faction Book as PDF 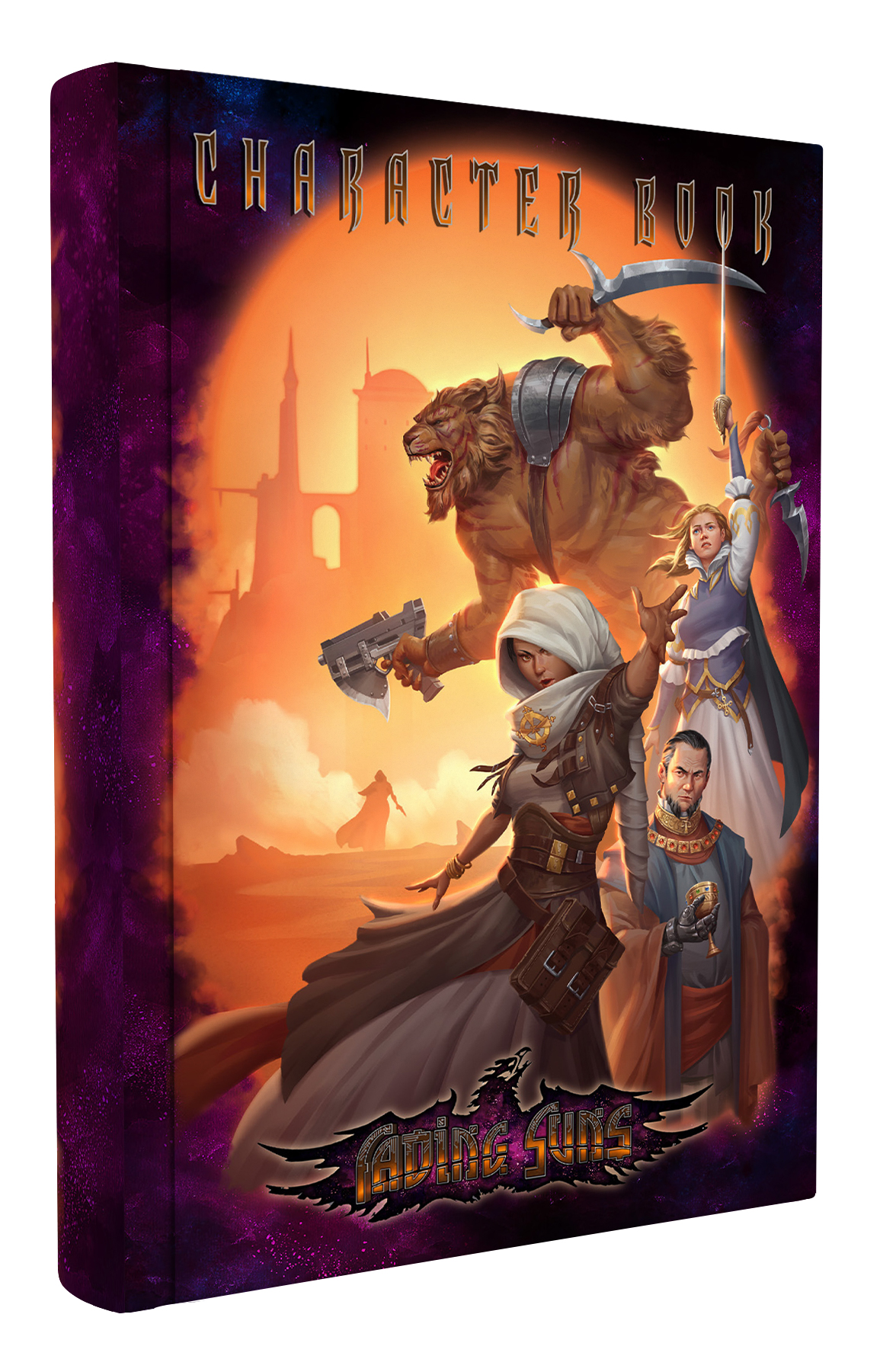 It is the sixth millennium. Humanity spread across the stars and built a republic of advanced technology and universal emancipation – and then squandered it, fought over it, and lost it. As the light of the stars began to slowly fade, a New Dark Age descended upon the Known Worlds. Then, from the ashes of war and ruin, Emperor Alexius rose to power and ushered in a new era of hope. He calls now for brave knights, wise priests, and resourceful guilders to bring his peace to all the worlds, known and unknown.

The Character Book presents the game system and player characters for Fading Suns. In the Victory Point System, each player uses a single 20-sided die and a handful of victory point tokens to enact their character’s dramatic feats before the winds of fate. This book includes character creation rules for all the major factions, as well as technological equipment, starships, psychic powers, and theurgic rites.

Buy the Character Book as PDF 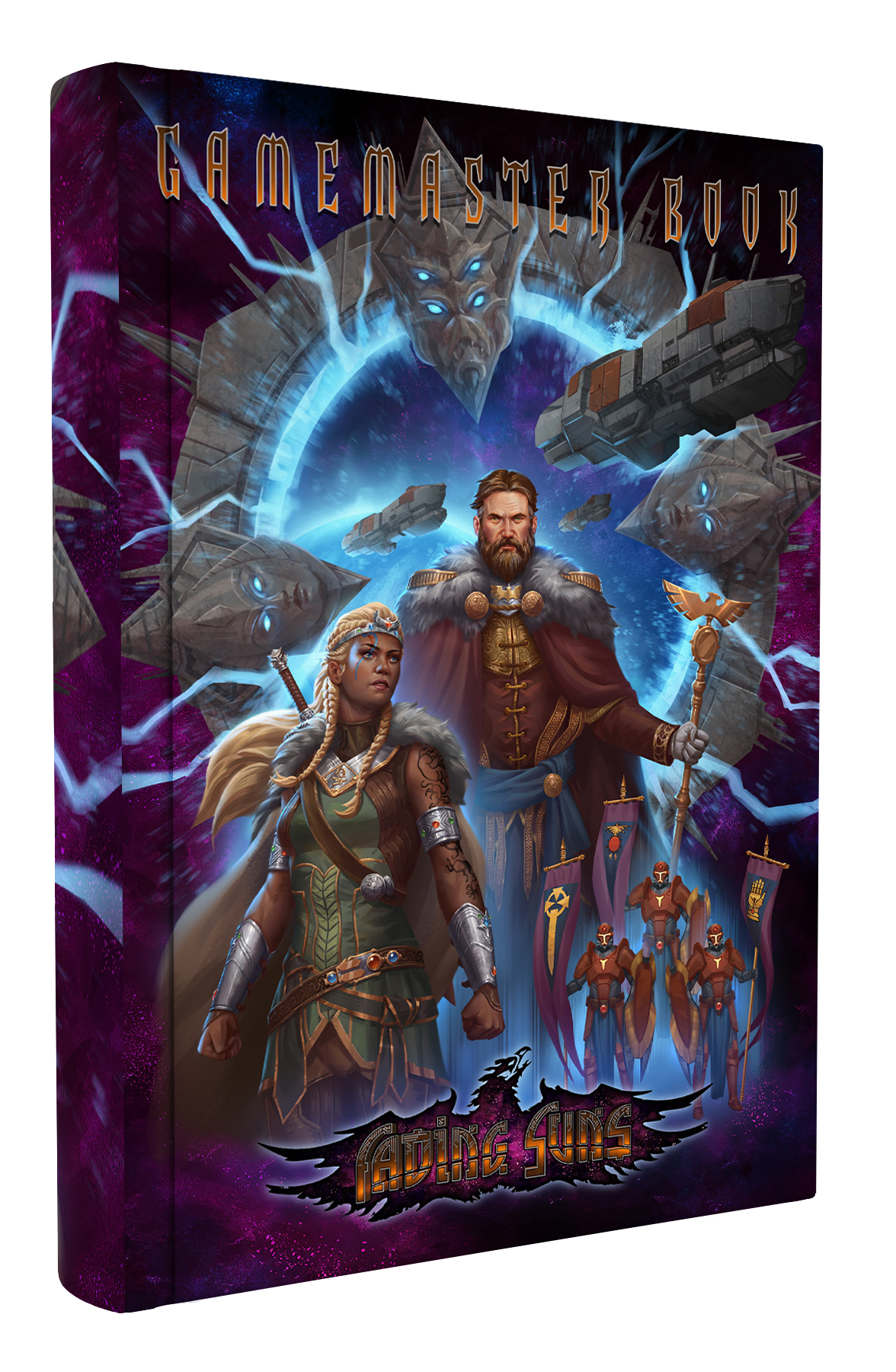 It is the sixth millennium. Humanity spread across the stars and built a republic of advanced technology and universal emancipation – and then squandered it, fought over it, and lost it. As the light of the stars began to slowly fade, a New Dark Age descended upon the Known Worlds. Then, from the ashes of war and ruin, Emperor Alexius rose to power and ushered in a new era of hope. He calls now for brave knights, wise priests, and resourceful guilders to bring his peace to all the worlds, known and unknown.The Gamemaster Book presents people, places, and plots for Fading Suns. Herein are guidelines for creating dramas for the player troupe and how to populate them with all manner of non-player-character allies, rivals, and foils. An example drama is included, as well as a roll-by-roll description of play.

Buy the Gamemaster Book as PDF

The Imperial Dossier series examines in-depth the main factions of the Fading Suns universe. Each book serves as a primer on a single faction, commissioned by the empire for its diplomats, bureaucrats, soldiers, starsailors, Questing Knights, and their Cohorts, with commentary from the Imperial Eye. Each book also includes a “factbook” about a topic closely related to the dossier’s faction, and a rules section that includes new callings, perks, equipment, and even alien creatures. 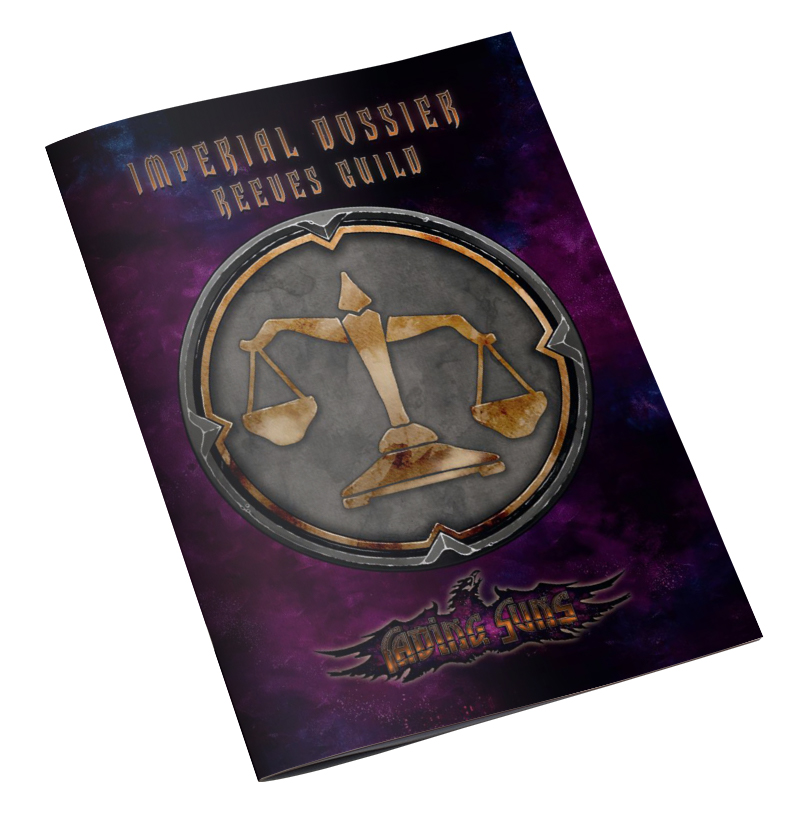 Somebody’s got to do the paperwork, and the Reeves do it quite well — so well that they are the de facto bankers of the Known Worlds and probably one of the richest factions in the universe. Few realize just how wealthy they’ve become through their loans to noble houses. Just about everybody owes the Reeves, and when a Reeve comes calling in favors, few dare deny them: their debt collectors are feared on every planet, moon, and asteroid. Most people, however, know the Reeves as lawyers, legal-eagles, and justice-seeking firebrands, defending the high and the low alike from their accusers. Includes: Money & the Law, a primer on money, crime, and punishment. 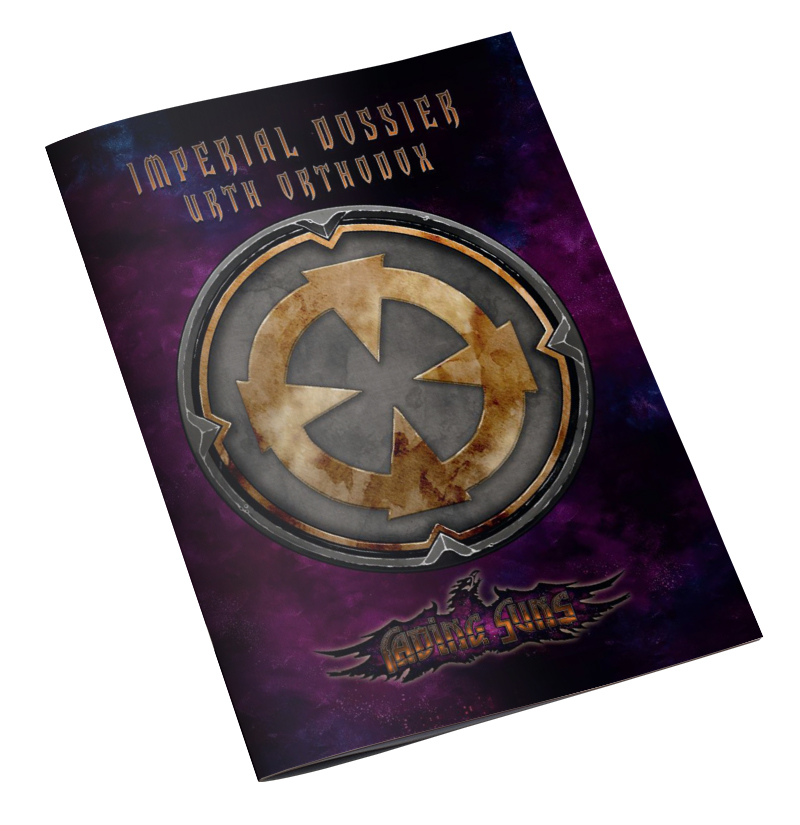 Priests of the Orthodoxy — from the ostentatious bishops of the capital cities to the humble parish priests in the most poverty-stricken fiefs — are found throughout the Known Worlds. While this ruling sect of the Universal Church has gained a reputation for cunning political maneuvers, most of its priests know little of such things, being entirely too busy protecting the souls of the simple faithful. While many may spurn the Orthodoxy for its overtly political role, when tragedy strikes, it is the Orthodoxy they return to for consolation. Includes: Theology, a primer on Church cosmology and scripture across all sects and orders. 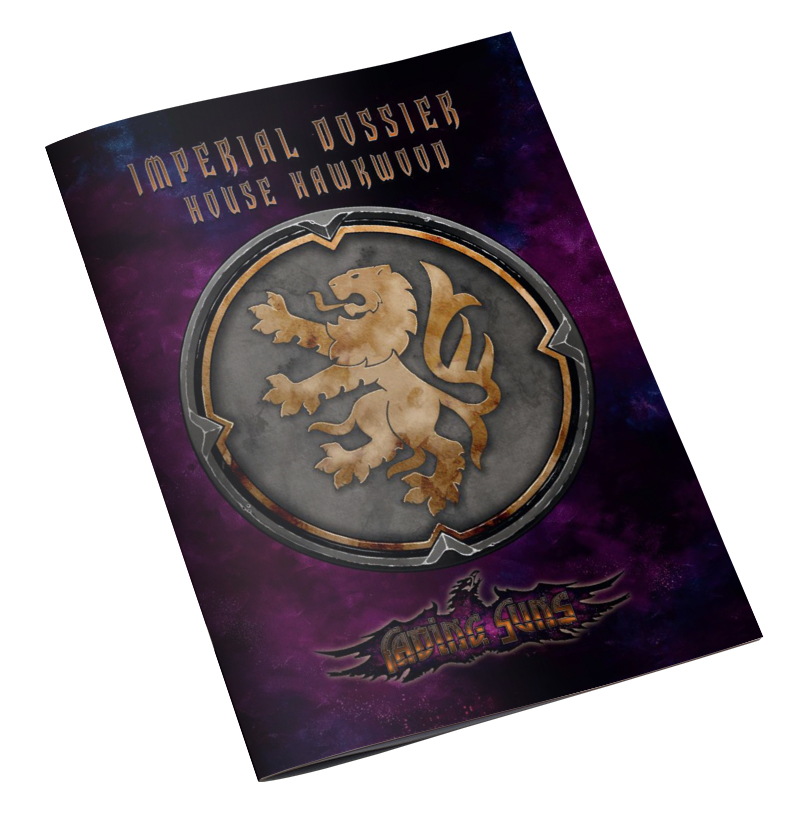 House Hawkwood saw one of its own become emperor, only to be sidelined by Alexius in his bid to win the favor of all the Royal Houses. No matter. The Hawkwoods have remained ever stoic and
unyielding before the tides of time and trouble. After withstanding years of raids by the Vuldrok, it is their turn to expand into the barbarians’ worlds and take back their lost glory.
Includes: The Nobility, a primer on noble titles, inheritance, and holdings for all of the Known Worlds’ noble houses, major and minor. 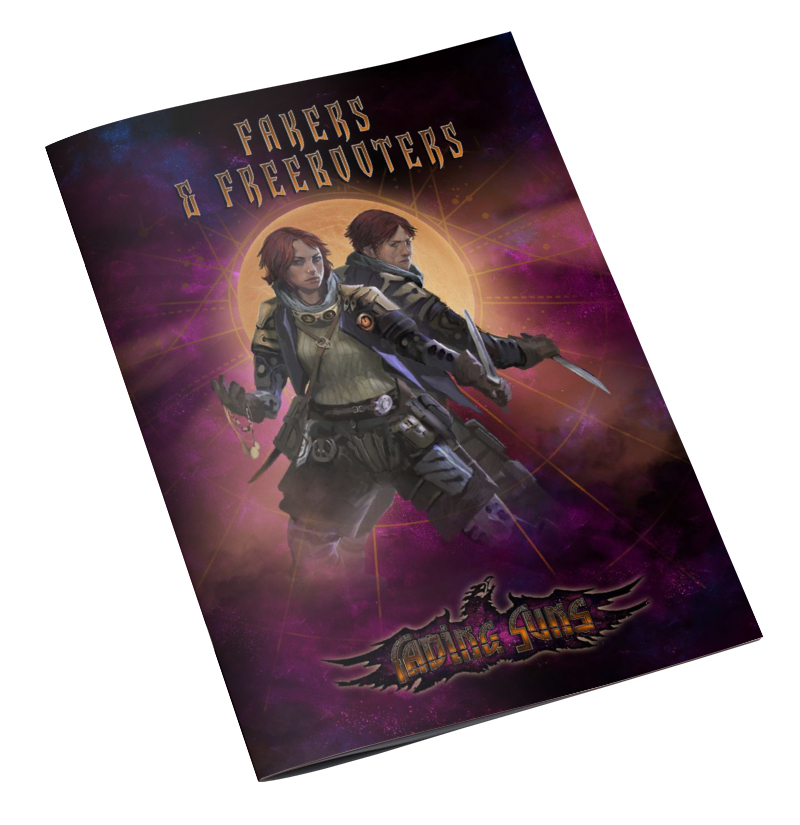 Space piracy — a plague on interstellar society! A scourge nearly impossible to eradicate! The line between pirates, privateers, opportunistic adventurers, and space captains confiscating resources for themselves is blurry. Common to them all, however, is their preying upon freight, infrastructure, and commerce, and their willful looting of space depots, scientific installations, and astro-settlements.

All pirates know the story of the raider-king Hrothlac, the legendary Vuldrok thane who pillaged Leminkainen, Byzantium Secundus, and Tethys for years before Vladimir Alecto finally united civilization against the barbarian threat (4540). According to legend, Hrothlac hid an emperor’s ransom somewhere in Hargard space, yet countless treasure hunts have turned up nothing. Are you able to find the legendary treasure? 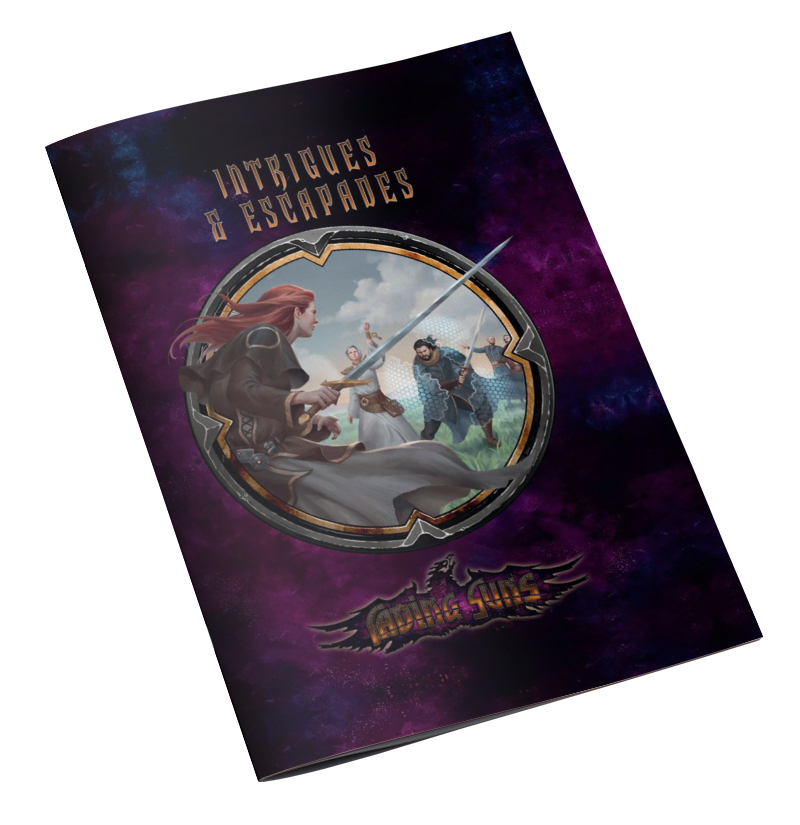 Nobles, priests, and merchants constantly vie for supremacy in a variety of intrigues that inevitably lead to risky escapades — kidnappings, rescues, heists — for troupes caught in their webs.

Scheming is a daily regimen for nobles, who spend inordinate amounts of time planning their latest move with panache and style. Priests use the Pancreator’s Grace as a bartering chip to access, ideological supremacy, and even sinecures to wealthy ministries. And don’t discount the merchants: whoever has the gold makes the rules, but whoever handles the gold can charge a hefty service fee. Since all these factions’ schemes often skirt the law, they often set up fall guys — independent troupes — to take the heat when things go wrong.

Intrigues & Escapades unveils the conspiracy customs among nobles, priests, and merchants, showing how some are raised from birth to scheme while others learn from hard knocks. Presented are two detailed dramas involving troupes in such dirty dealings, along with a host of drama hooks that gamemasters can develop with their own twists. 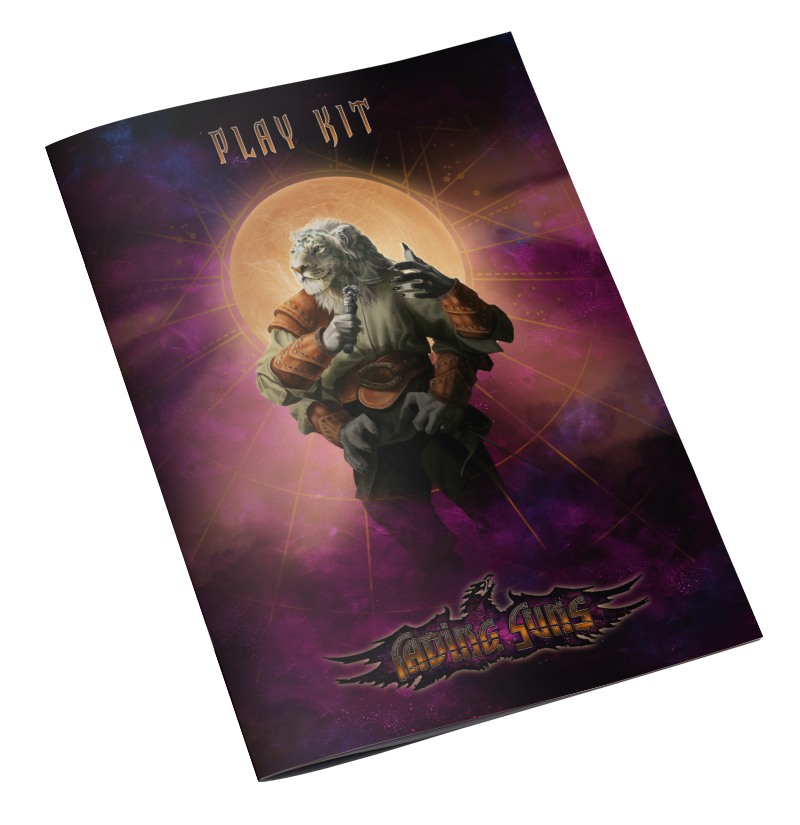 The Right Tools for the Job. Herein is a collection of fun and illuminating play aids to spice up any Fading Suns game, including:

Buy the Play Kit as PDF 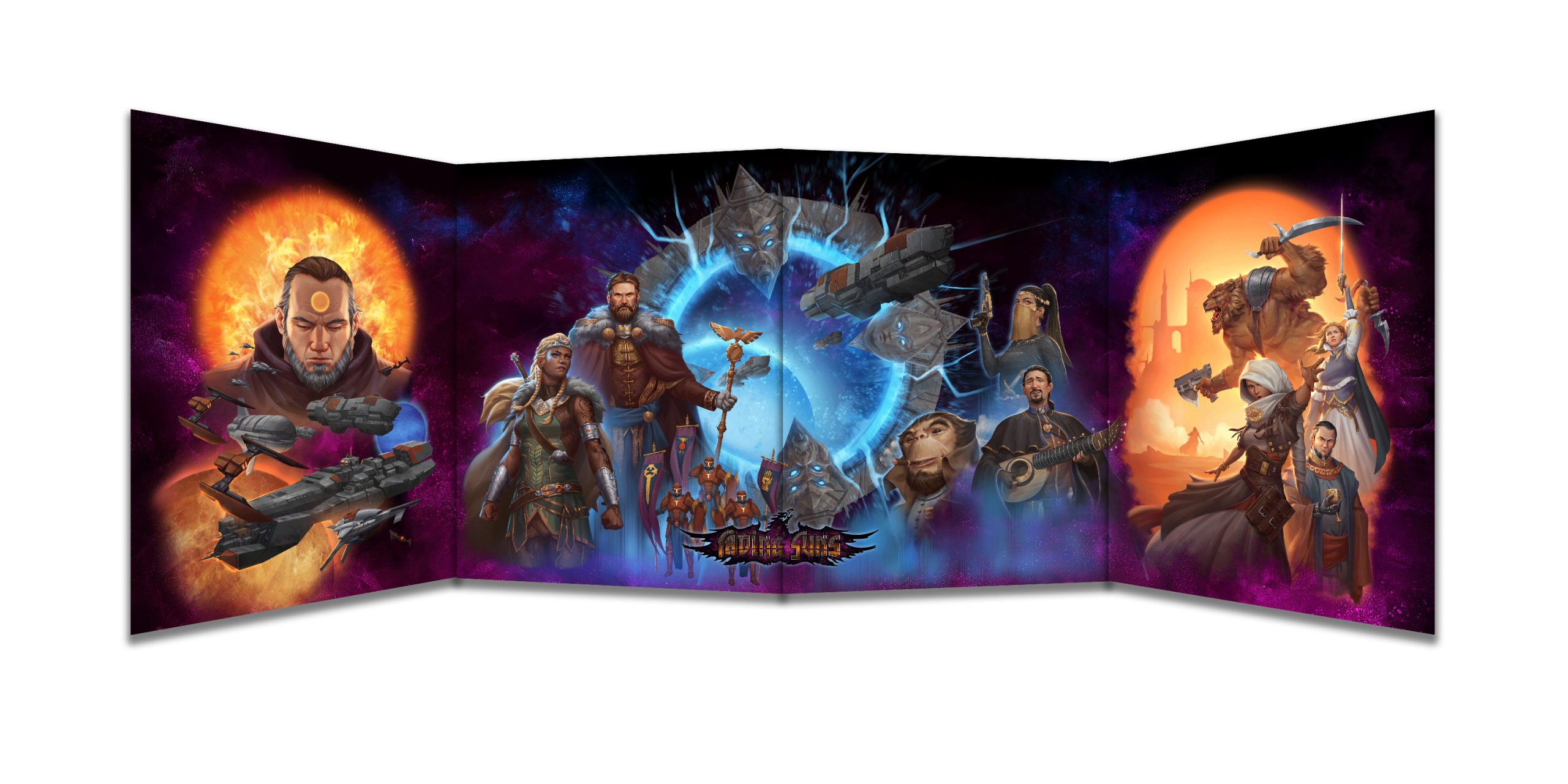 The Known Worlds and beyond host many dangers – all of which can be resolved using the charts provided in this sturdy, four-panel Gamemaster Screen. Herein are the most useful rules and charts: sequence of play, VP costs, Resistance ratings, environmental conditions, ranks, and more. Also included are punch-sheet tokens for victory points and wyrd points, making it easy to gain and spend these action resources during play.

Buy the Gamemaster Screen as PDF 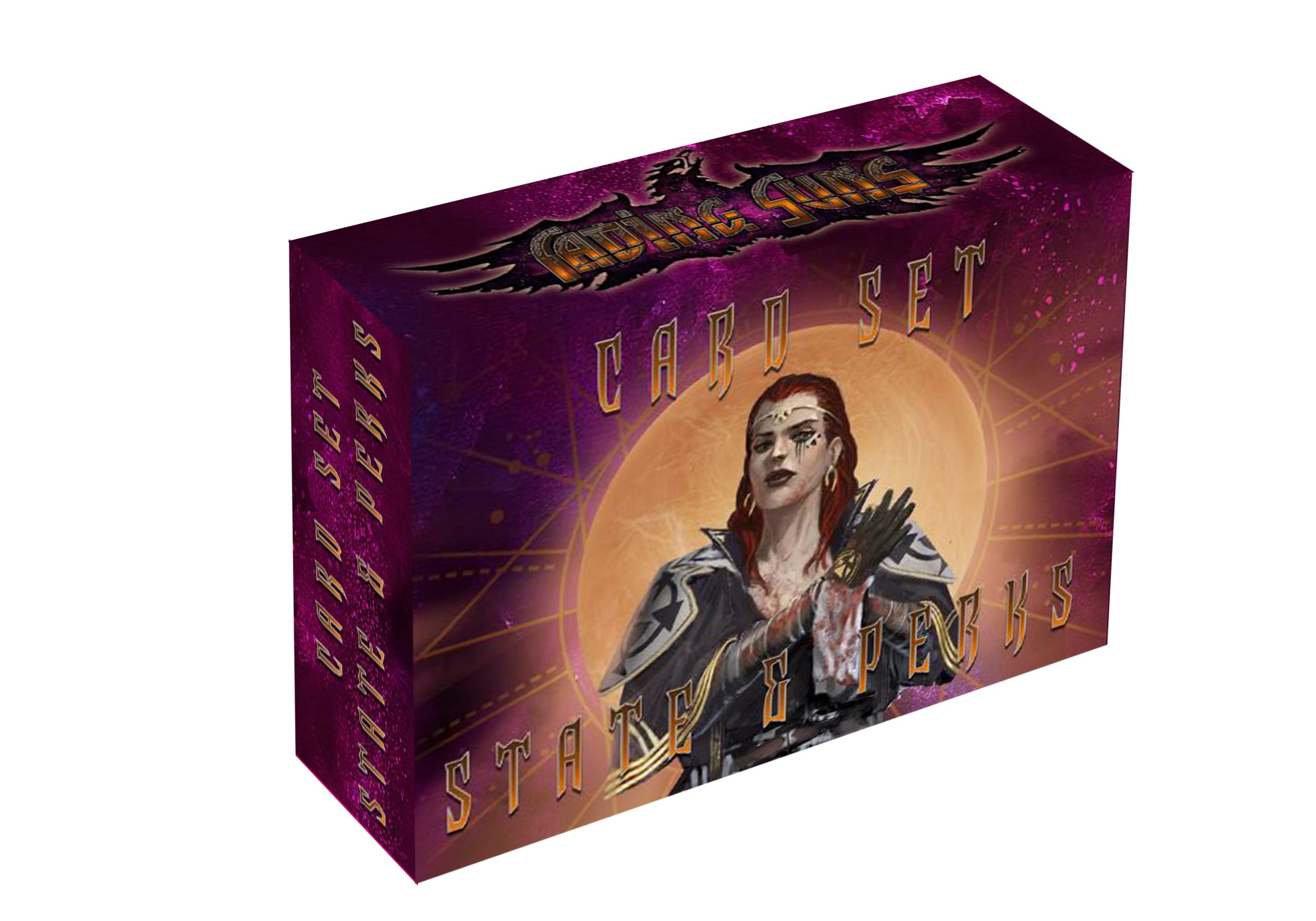 This Card Set includes 307 Cards with all the physical, mental, social, and technological status effects, as well as handy reference cards for every perk in the Fading Suns Character Book.