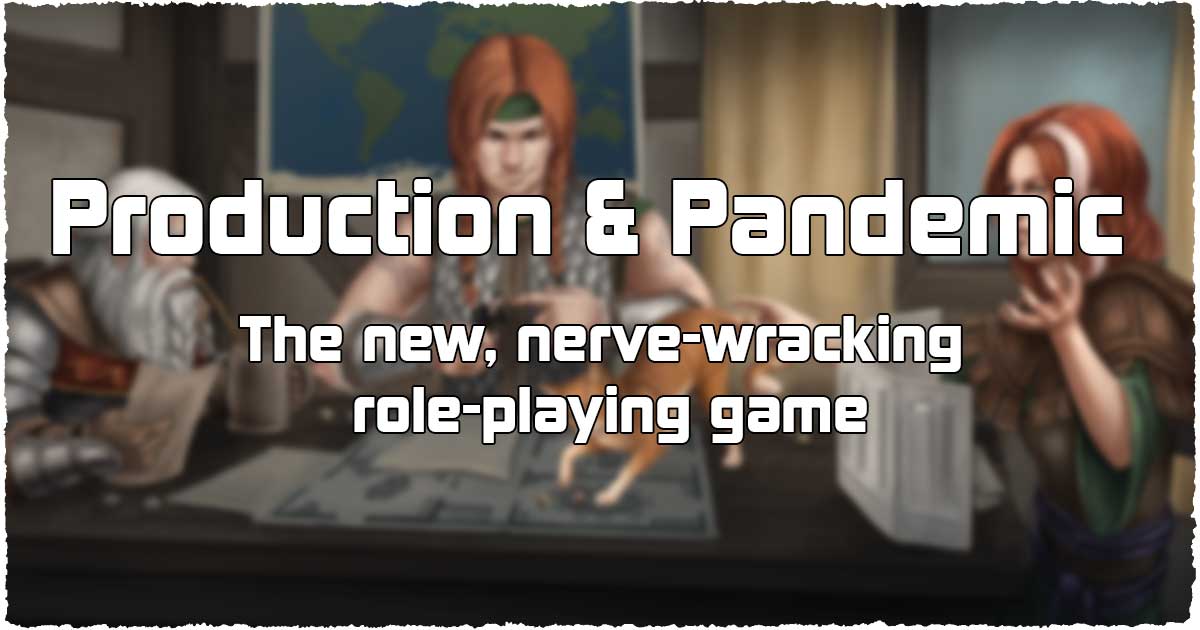 After we had to revise several announcements and statements regarding the release dates of our products and especially regarding our crowdfunding deliveries shortly after, it’s time to give you a deeper insight into the situation.

The pandemic has not only taken a firm grip on our private lives, but also on the global economy. Not everything has to do with the direct effects of Covid-19 (e.g. closed factories or closed borders), but also with indirect effects (e.g. a supplier cannot deliver, therefore production cannot continue etc.). In addition, there is a shortage of materials created by the renewed demand – in other words, suddenly everyone wants to make up for the lost months and the production of base resources cannot keep up.
But let’s take it one step at a time: At the beginning of the pandemic, it was a Wild West. Production in China stopped from one day to the next – and all our orders placed there were on hold. As you all know, this mainly affected dice production (the word alone gives me chills), but other materials such as cloth cards or poker chips were also affected. In fact, everything that is not exclusively made of paper.
Fortunately, we had already started the year before to withdraw as much of our production as possible from China and to look for partners in Europe, e.g. for our dice trays. The reasons for this are many and varied, but our primary concern was to shorten transport distances, both for economic and ecological reasons. To achieve this, we sometimes accepted significant price increases. Unfortunately, we then found that almost all of our new partners were also unable to deliver, because they ended up producing in China themselves. That was a bit sobering, but in the end it helped us to find the right partners. In the meantime, we only have the things produced in China that we currently can’t get anywhere else, and unfortunately these are still significantly more than we would like. But we are working on it!

Back to the topic: What else happened in the early days of the pandemic? There was a lot of uncertainty everywhere about who was still producing. Is it even still allowed to produce? Will the goods arrive at all (keyword: closed borders). And most importantly, should production continue at all? No one knew how the situation would develop, and the large book publishers in particular suddenly cut back production significantly. This actually made it very easy for us to get printing slots during this phase; in some cases, our printers literally begged us for more jobs.
This may not sound bad at first, but such developments always have a knock-on effect. After the printers received fewer orders, they drastically cut their orders with paper and cardboard suppliers. And here, too, uncertainty played a major role, which repeatedly led to shortages of special materials (e.g., individual types of artificial leather).
Let’s fast-forward a few months: the summer is over, people have come to terms with the pandemic, demand is picking up again and companies have a number of projects piled up. The economy is picking up speed again and suddenly a lot of projects want to go through the pipeline at the same time. Delays are occurring everywhere and prices are rising. This development is also working its way through the supply chain, as paper and cardboard suppliers can’t keep up with the volumes and are raising prices even further due to the scarcity of resources – this is called the free market.
All this leads to an increasingly difficult production situation, because confirmed commitments are suddenly no longer worth anything and the goods arrive when they arrive. This situation is heading for its peak right now and to be honest, I have never experienced anything like this before. We have arrived in the Wild West again, but this time there is also gunfire. There are statements like: “Can only be delivered by day XX – but if it is actually needed 6 weeks earlier, we unfortunately can’t keep the prices”. This is extremely bitter, especially in an industry as financially constrained as ours.
However, don’t misunderstand me. I do not blame my printers! We have been working closely and trustfully with most of them for many years. None of them wants to get rich off us, but the material costs they incur when they get paper from “I-don’t-want-to-know-where” must of course be passed on. And if the required material is not in stock, it simply cannot be produced.

We have not yet reached the end of our exciting scenario yet- I have one more!

A lot of manufacturing companies’ goods have to be shipped. Even though many ships have sailed half empty and the trains have been standing in the stations, this has not resulted in any “time credit”. The logistics industry cannot even begin to satisfy the demand at the moment, and it comes to such curious situations as “Sorry, the goods were there, the ship was there, but we couldn’t load the goods because there wasn’t a single container left in the entire port.” At the moment it is cheaper to buy a new container that will be delivered in 3 months (still has to be produced of course) than to use a 3 year old used container that already exists. Doesn’t make sense, but that’s the way it is at the moment.
In airfreight the situation is even more dramatic because there are hardly any passenger planes flying anymore and they have (what most people might not know) a lion’s share of air transports on the side, so to speak. Therefore, it is currently completely impossible for us to fly even the most important goods, because the costs have increased eightfold since the beginning of the pandemic and continue to rise unrestricted.
Oh, and a ship blocking the Suez Canal doesn’t help the whole thing either, of course. For me as a production person, these are absolutely crazy times and I’m starting to get the feeling that the “mental health” rules in this game are not well balanced. But as I mentioned before – we’re doing our best and trying to keep you guys updated as best we can. If it sometimes seems to you that we don’t know what we’re doing when we announce a date and then change it three days later, it’s simply because our roll on ” tea leaves reading” was a botch.
At the same time, I am sure that this bubble will also burst soon. However, it will then take some time before the resulting ripple has made its way through the production chain. Before the middle of the year we, and therefore you as well, will not notice any easing in this regard.
Long story short: Please bear with us, as many things are beyond our control at the moment.
Best regards,
Markus