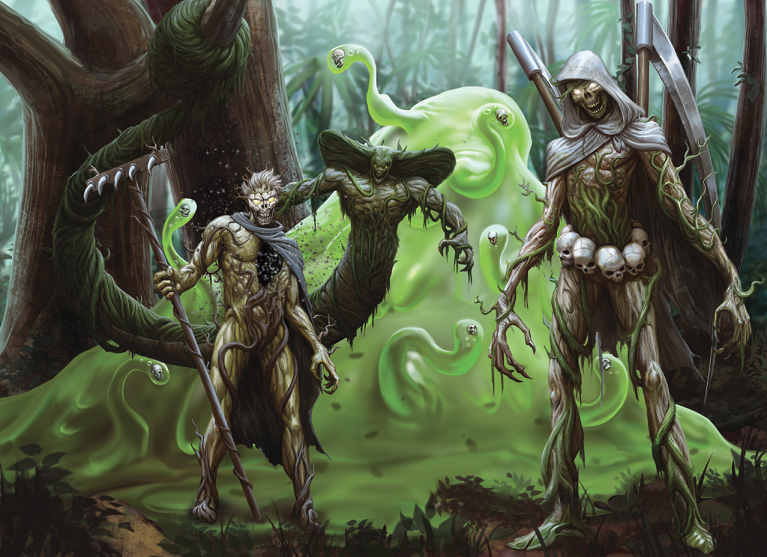 In this preview we take a look at a few Threats you’ll find in the realm of horror.

Gospog of Orrorsh were the first gospog created, and they have only been refined further by the machinations of the Gaunt Man. 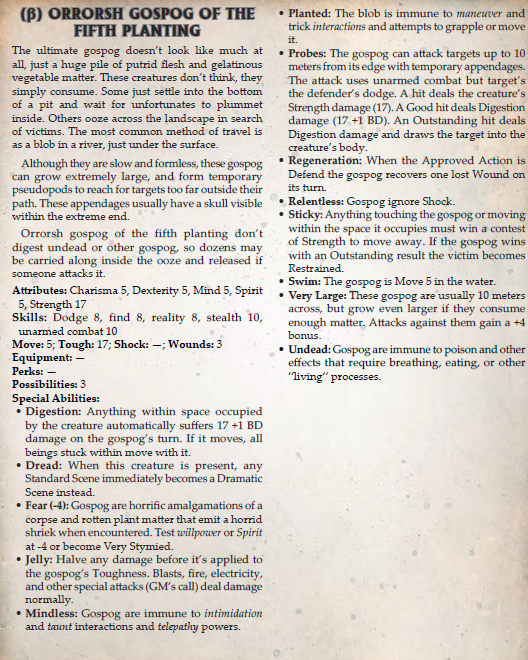 The Ravagons, as a species, arose in realm called Ravok, or sometimes Ravok’s World. Ravok teemed with vicious life, and the Ravagons were its savage apex predators. Ravok was named for its primary god, the personification of the successful hunt.

Ravok, the world and the god, was coated in blood and thrilled in tearing meat from prey. Any other gods shrank before the primacy of the stalkers.

The ravagon relationship with reality is unique. Their world—the reality that created them—is gone. They don’t carry World Laws or even axioms with them. For peoples like the Akashans such a state is disastrous. Ords wither and die, Possibilities dry up, and even Stormers eventually disconnect and begin to fade with nothing to connect to.

Ravagons, uniquely, transcended fluid reality completely. They live only for the hunt, and the hunt doesn’t require axioms, so neither do the hunters.

Ravagons don’t cause contradictions, so they are immune to the disconnections that hamper the regular troops of a High Lord.

Surprisingly, this neutrality offers advantages, which the ravagons refer to as the Gifts of Ravok. Ravagons may use Reality Perks even though they are not connected to Core Earth. In fact, encountering similar gifts among the humans of Core Earth drew grudging respect in the ravagons and the vague suspicion that perhaps humans know Ravok better than they admit. Human history seems to support this conjecture.

Rare ravagons feel drawn to a specific reality, so much that it becomes part of their name and being. These ravagons lose the Gifts of Ravok, but gain strange new powers based on their chosen home. These ravagons may disconnect, but never transform again—their psyche is too committed to their realm-based identity. If transformation must occur, the ravagon unravels into What-Ifs instead. 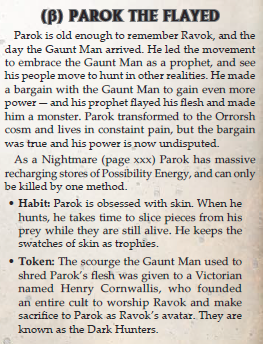 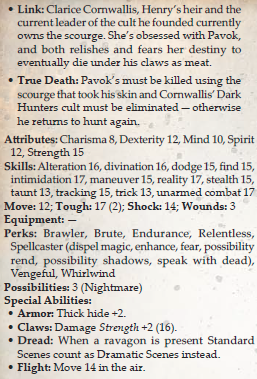 A subtle hierarchy exists among things that go bump in the night. At the lowest end are monsters—bestial gospog, insane serial killers, and tainted animals all exist at this level. Orrorsh offers nothing extra to monsters; Mechanically they operate like normal foes.

Horrors are one step more dangerous than monsters, and usually have the Cloak of Darkness and Horror special abilities. Monsters primarily kill or consume and end up creating fear as a byproduct. Horrors, on the other hand, instill terror and suffering by design. Death and damnation are side effects.

Horrors tend to remain local and affect a single community. Ghosts, vampires, and werewolves are all examples of horrors.

A monster may become a horror (gaining Cloak of Darkness and Horror) once it cultivates a terrible enough reputation. Haunted places can become horrors themselves, imbuing Cloak of Darkness on any monster that hunts within the region and granting a separate pool of Possibilities for its denizens to use!

If you have any questions or would like to discuss this preview, head on over to the Ulisses Spiele Discord server!